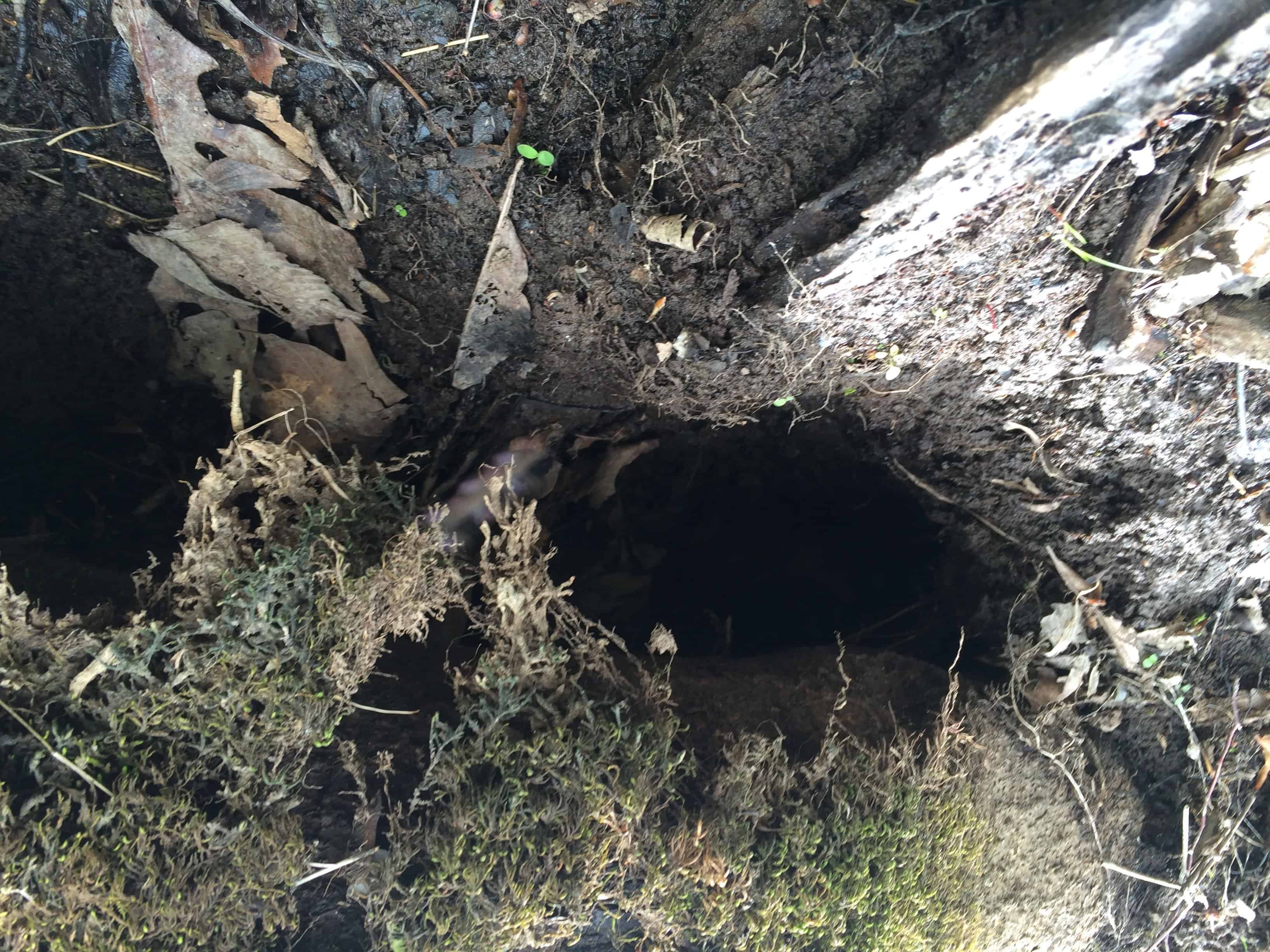 Before I start my article about wildlife dens I wanted to give an update on the foxes. I know in the last blog I said I was going to post some new photos of the foxes at their den. Unfortunately, when I pulled out my trail camera it was completely dead. Not even a battery change did the trick. I have not purchased a new one yet so the photos will have to wait until next year assuming the foxes are still around. About three weeks ago the foxes decided to move their den site for some reason. Maybe it was my dogs snooping around the den that caused the foxes to feel threatened.

Two weeks ago I decided to take the dogs for a hike in the woods behind our house. Walking along the trail all of a sudden the dogs spotted a fox and took off after it.  I thought the dogs were gone for sure. One dog came back pretty quickly. The other disappeared through the brush with the fox out front running as fast as it could.

Fortunately the fox is much faster and left the dog in its’ dust. It took awhile for my dog to come back but he eventually did, exhausted from the chase.

The place where the dogs first spotted the fox is a very large boulder with smaller rocks piled on top. I looked around and discovered many animal parts on the ground.

The leaves on the ground were also scraped away. These are both clear signs of a fox den.

As I walked closer the pungent odor of fox urine smacked me in the face.  Then there it was, the entrance to the den.

About 50 yards away was another large boulder. When I walked around it I found another fox den. After looking around for a little while I decided it was time to head back to the house. We started to cross the creek when I noticed a long and slender brown figure jump in the creek. I turned to look and there was a mink swimming across about 75 yards away.

When it reached the other side it disappeared.

My curiosity got the best of me so I had to see where it went. When I made it to the spot where it vanished I found the hole in the photo above. It was obviously the entrance to the mink den. I never saw the mink again but it sure is cool to know I have a mink living on my property!

Searching for wildlife dens and bird nests is a fun activity to do in the springtime.

Once a groundhog den has been abandoned, a skunk will gladly take over.

Instead of sitting in front of the tv this weekend why not head out into the woods and search for some live action at wildlife dens. Be careful not to disturb the animals and they should put on a show for you.

This link is to a great video by The National Geographic Society about animals and their homes.  Get out there and enjoy nature! https://www.youtube.com/watch?v=DZGHrCf9Edo